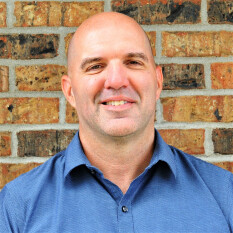 Monte was called to West Twin Grove in June of 2018. Monte holds a degree in Philosophy from the University of Missouri-Columbia and a Master of Divinity from Lincoln Christian University. Monte came to Christ shortly after earning his undergraduate degree in 1997. He received a call to ministry in 1999 and has since served in multiple church roles including Teacher, Fellowship Director, Praise Band Member, Sunday School Director, and Associate Minister/Youth Director.

In addition to his pastoral role, Monte is a Chaplain for the IL Army National Guard, serving the 106th Aviation Battalion, headquartered in Peoria, IL.

Monte is married to Ginger Bowers. Together they are blessed with a blended family of five children (Erik, Dallas, Lauren, Abby, and Tessa). They could probably use your prayers since they will have four in college this year.

Mark leads worship during our 11 AM Service.  Mark has been married to his lovely wife, Sharon, for 36 years. They have 2 grown children, Jennifer and David, 4 grandchildren, Kali, Fabiana, Alex, and Logan, and 2 precious great grandchildren, Liam and Mila.

Mark has been leading people in worship with West Twin Grove Christian Church for over 15 Years. Mark was one of the founders of the Gospel Opry.